The bar chart shows the number of people who visited different museums in London. Summarise the information by selecting and reporting the main features, and make comparisons where relevant. 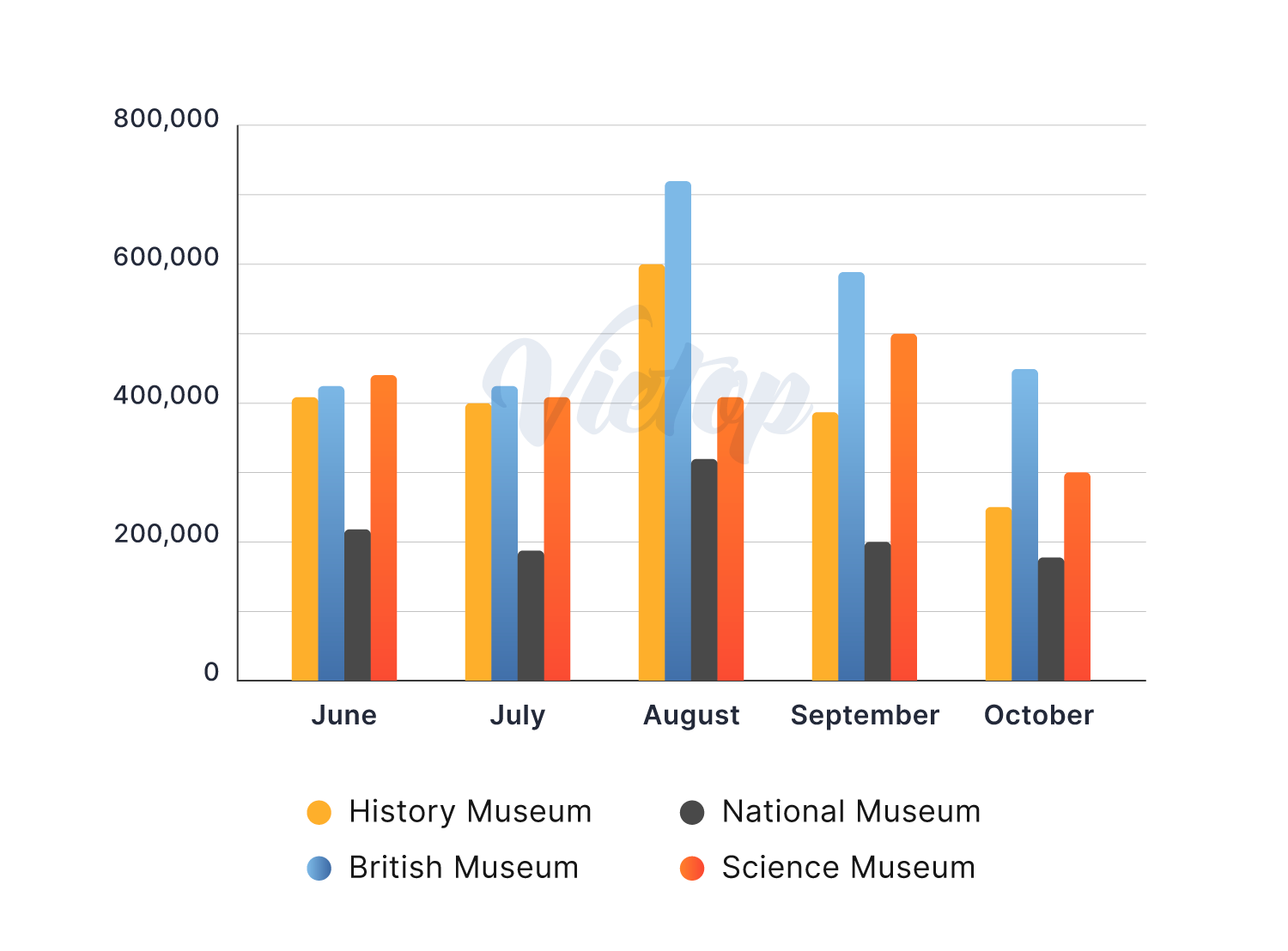 The bar chart illustrates the number of visitors of four museums in London in five months  of an unspecified year.

Overall, with the exception of the Science Museum, the number of visitors to each museum witnessed an upward trend during the first half, and then decreased in the second half of the period. It is also clear that whilst the British Museum was the most frequently visited in most of the months, the National Museum was consistently in the last place.

However, in August, the number of visitors to the British Museum and the History Museum enjoyed remarkable upswings, with the former nearly doubling to 720,000 and the latter rising to 600,000. Meanwhile, the Science Museum’s figure fell down to the third place as it dropped down slightly to about 410,000 before peaking at 500,000 in September. All three figures experienced downward trends in October, at around 250,000 for the History Museum, 450,000 for the British Museum, and 300,000 for the Science Museum. During the same time frame from July to October, visitors to the National Museum, despite experiencing a substantial rise to around 310,000 in August, stayed between 180,000 and  210,000.

It is more important to spend public money on promoting a healthy lifestyle in order to prevent illness than to spend it on treatment of people who are already ill. To what extent do you agree or disagree?

It is said that taxpayers’ money should be allocated to promote a healthy lifestyle rather than to focus on treating patients. I completely agree with the statement, for disease prevention is cheaper, and being healthy is always better than being hospitalised.

Knowing how to lead a healthy life is more cost-effective than paying money to cure a particular disease. For instance, the cost of a balanced diet containing fundamental nutrients in the form of fresh ingredients such as meat, fish and vegetables is within financial capacity of even the underprivileged. In contrast, the expenditure on medical treatments of serious diseases such as cancer or diabetes may be as high as thousands or even millions of dollars, which is a fortune for the majority of people. Therefore, rather than spending a huge sum of money on treatment, allocation of the government’s budget for promoting a healthy lifestyle, which is much less expensive, is deemed a wiser investment.

Additionally, it is more comfortable to be fit and healthy than to stay in a hospital ward surrounded by drugs and medical devices. In fact,  maintaining positive habits of eating well and doing physical exercises, despite taking a decent amount of time and effort at incipient stages, yields more desirable results than spending parts of one’s life on a wheelchair, with a zimmer or heavily dependent on medical treatments. For example, no one would have to suffer from costly hours of painful chemotherapy if they are able to minimise the cause by leading a healthy lifestyle.

In conclusion, it is my firm conviction that prevention is always better than cure, and therefore promoting a healthy way of living is the better budget spending. Tackling the upstream causes of ill health is the core principle of any person’s overall well-being.